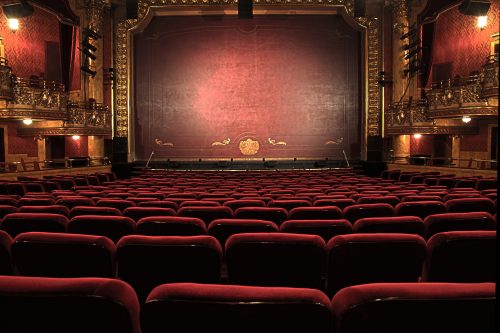 Several years ago, I decided to stop acting for a while and concentrate on other things like writing and training work. But niggling away was a voice that said you’re trained to be an actor why not go back to it? This voice had been rattling around for a while when an email appeared from RADA, introducing The Graduate Showcase in collaboration with Women@RADA. This was an opportunity for actors who had trained at RADA to re-launch their careers after a break. Myself and 15 other women were to perform two monologues, of two minutes each, consecutively between bursts of music.

I hadn’t acted on a stage for nearly 10 years and the nerves started to creep up on me. What if I walked out on stage and nothing came out of my mouth? What if my voice croaked and dried up? What if hundreds of people turned up? What if no-one turned up?! This diatribe of negative stuff was echoing around in my head. It flared up in the middle of the night and I thought, I can’t do this, I’ll just cancel it. My partner said to me, ‘you can either let these fears get the better of you, or you can embrace them and make the most of this opportunity.’ And then I thought, what have I got to lose?

I tried the speeches out loud and read them to different people to help me decide. Finally, I chose Queen Margaret from Henry VI part two – a fiery, manipulative and adulterous queen, and Kathryn from Abi Morgan’s play, Splendour – a tough photo journalist with a penchant for buying clean sheets.

I knew I needed to TAKE TIME to PREPARE and I practised them over the course of a long weekend. I started with a PHYSICAL and VOCAL WARM UP, shaking out different parts of the body so I was energised before moving onto breathing exercises. I did THE PUSH exercise, where you stand a foot and half away from a wall, with your hands at shoulder height, pushing into the wall. Most importantly, you ALLOW YOUR BELLY TO RELEASE, and then breathe air into your Diaphragm. We don’t usually think about our diaphragm, which sits between our lower ribs and is a bit like a balloon. When air is drawn into it, it fills up causing the lower RIBS TO FLAIR OUT and our lower BELLY to go IN. However, our TOP RIBS near the sternum go OUT (like a BUTTON).

I used the theatre practitioner Harold Guskin’s technique, of taking the lines off the page. You sit in the most comfortable place in your house, at the kitchen table or in a comfortable chair, you look down at the first line of the script and breathe in and out looking at the line, then you look up and say the line out loud, and so on. You are allowing the line to affect you consciously and unconsciously, and you say the line without any performance, so your response is authentic. ‘Create nothing, deny nothing,’ as Meisner once said. This takes the pressure off any kind of PERFORMANCE at this early stage.

We all met at RADA on the Tuesday and Wednesday, and we were opening the Showcase later that evening. I tried to allow Shakespeare’s language to do the work, using Queen Margaret’s power of rhetoric, as the rural French queen done good, as the seducer and manipulator who gains control over Henry. I channelled Kathryn’s fear of her emotions by focusing on the practicalities within the speech, where she stored her sheets, her vision of an old woman in the street.

Backstage, as the live tannoy was filling with the noise of the audience taking their seats, I didn’t go over and over my lines, but I TRUSTED that I had done the WORK. Now it was about being PRESENT and REAL. As one of the directors said before we all went on, ‘don’t be GOOD, BE REAL’. I stood in the wings of the Vanbrugh stage as 150 people sat in the auditorium. I was nervous, very NERVOUS, my heart rate was fast and my mouth dry, but I thought F…k IT! I walked on stage and I OWNED the space, I BREATHED, I tried to be PRESENT and CONNECT with the audience. Finally, I was able to embrace the FEARS rather than shrink away from them.